At the COP26 Summit in Glasgow, Reaction Engines, IP Group and the Science and Technology Facilities Council (STFC) have announced the formation of a joint venture technology company to produce lightweight and compact ammonia cracker reactors for use in hard to decarbonise sectors.

The new joint venture will design and bring to market lightweight and compact ammonia reactors to enable the use of ammonia as a zero-carbon fuel for use in transport applications, such as aviation and marine shipping, in addition to other hard-to-decarbonise applications such as power generation, particularly ‘stranded grids’ or ‘off grid’ applications. The reactor will catalytically crack the ammonia into an easy to combust fuel for gas turbines and internal combustion engines.

The collaboration will combine Reaction Engines’ heat exchanger technology developed for its SABRE engine and currently being used in other technology applications, STFC’s leading expertise in developing ammonia catalyst technology, along with funding and venture-building expertise from IP Group.

Commenting, Dr James Barth, Ammonia Programme Lead, Reaction Engines, said:
“I am thrilled to see the hard work we’ve been undertaking with our partners at STFC culminate in the formation of a new joint venture to bring to market decarbonisation technology solutions. Having IP Group’s backing for Reaction Engines’ first commercial spin-out is a huge vote of confidence in the compact, lightweight ammonia reactor technology we are developing. We are excited to work together to help decarbonise power and propulsion systems in transport, power generation, and other hard to abate sectors.”

Fully decarbonising transport, and particularly long-distance travel, remains one of the hardest to solve technological challenges as countries seek to move towards a net-zero economy. The ideal future beyond current maritime and aviation fuels would be a carbon-free alternative that mimics all the essential propulsion properties of existing carbon-based fuels. Appropriately blended using the unique lightweight cracker technology developed by the new joint venture, ammonia and hydrogen together can be the carbon-free substitute that addresses the challenges of hard-to-abate sectors such as aviation and maritime.

Ammonia is a product that is currently widely transported and stored globally, has a higher volumetric energy density than hydrogen and can be used alongside hydrogen as a zero-carbon replacement for other carbon-based fuels.

The joint venture technology company is taking forward IP that was developed with STFC proof-of-concept funding as part of STFC’s active support for innovative technologies. The collaboration was kick-started through the Harwell Energytec Cluster and initially funded by the STFC cross-cluster proof of concept.

Professor Bill David FRS, STFC Senior Fellow and Professor of Energy Materials Chemistry at the University of Oxford, said:
“After completing STFC funded proof-of-concept projects, I am excited about the impact that our technology can have in enabling low-impact transitions in hard-to-abate energy sectors. Playing to the complementary strengths of ammonia and hydrogen, our cracker technology can rely on the global ammonia infrastructure to provide, at scale, blended ammonia-hydrogen fuels that mimic fossil fuel performance and offer affordable retrofitted energy solutions.”

The joint venture will be supported by initial seed equity funding from IP Group and will work closely with Reaction Engines and STFC to design and commercialise each company’s intellectual property.

Dr Robert Trezona, Head of Cleantech, IP Group, said:
“As the leading cleantech venture investor in the UK, we are delighted to be partnering with two of the country’s most innovative organisations to pursue ammonia for energy. With the Energy Transitions Commission, we highlighted green ammonia as an essential component of a net-zero economy in the Mission Possible report 2018. The combination of technologies from Reaction Engines and STFC is a profound breakthrough and we are excited to be joining forces to build a technology champion in this space.”
At present aviation and maritime account for 5% of total global carbon emissions and both sectors are expected to see significant increases in carbon emissions over the coming years. 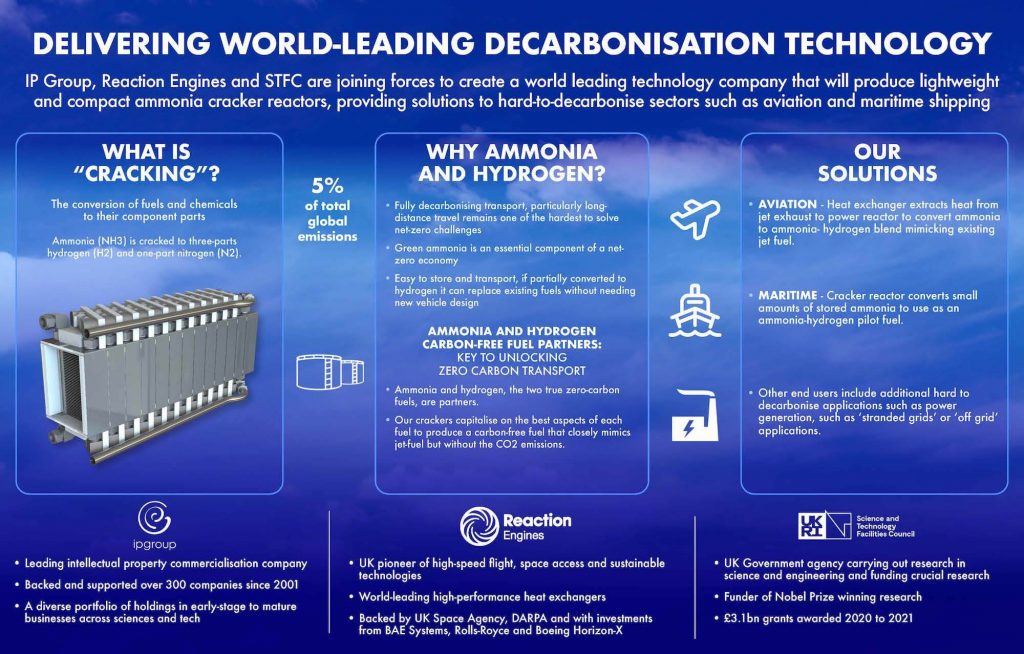 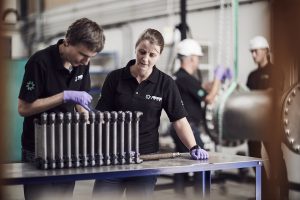